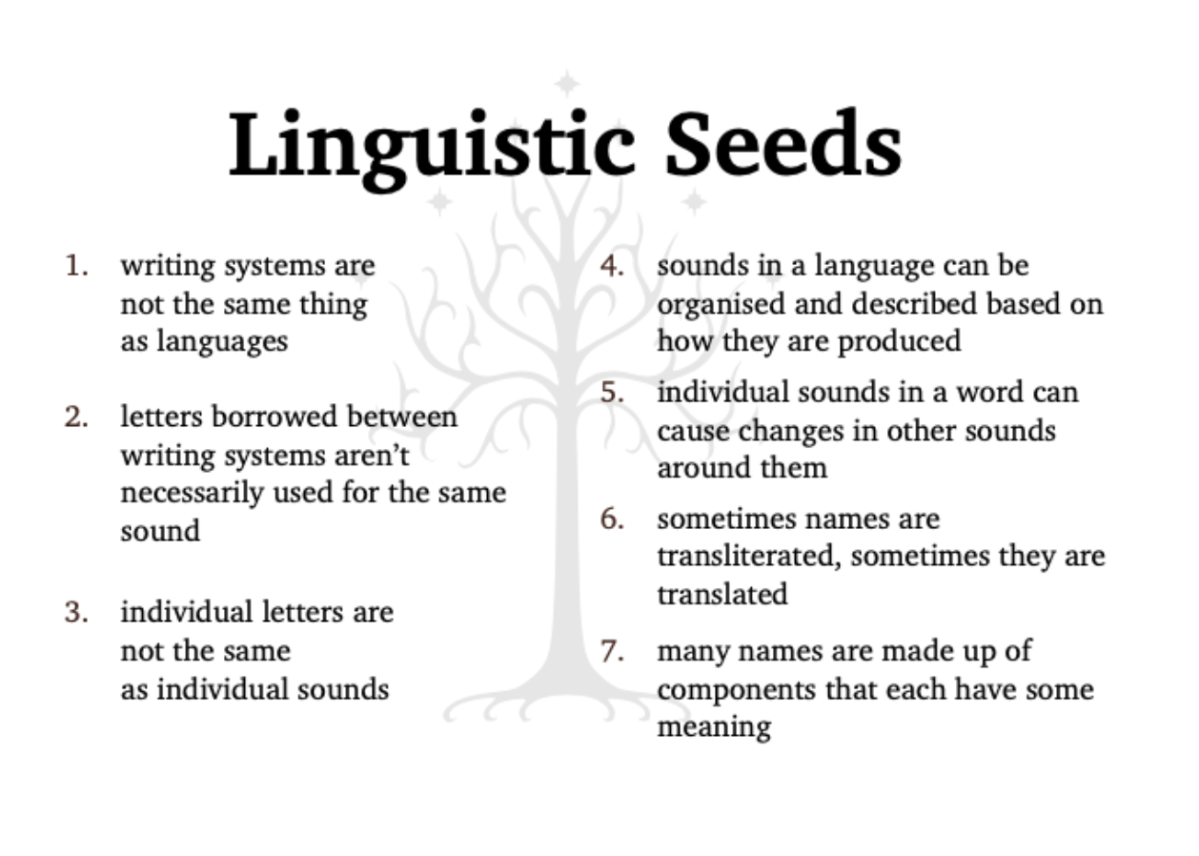 James K. Tauber is a philologist, linguist, and software developer who works with scholars around the world using computers to better understand languages and texts. This is the third of three guest posts, based on a presentation given at New England Moot in 2019, on how Tolkien’s works can be used to introduce children and young adults to some fundamental ideas in language.

In my first post, I looked at the runes in The Hobbit and how they can be used to introduce some core concepts in the way that languages and writing systems interact. In the second post, I looked at two more aspects of language exemplified in Tolkien: how the different sounds in a language can be organised and how those sounds can cause other sounds in a word to change.

Seed 4: Sounds in a language can be organised and described based on how they are produced

Seed 5: Individual sounds in a word can cause changes in other sounds around them

In this final post, we’ll look at the wonderful subject of naming things and how Tolkien did it.

Seed 6: Sometimes names are transliterated, sometimes they are translated

The following is a passage in the Old Norse saga Vǫluspá, dating back to the 10th century.

This saga is one of our major sources for the myth of creation and the end of the world in Norse mythology. This passage is listing a bunch of dwarfs (not dwarves). But look at some of the names. We can find Durin, Bifur, Bombur, Nori, Fili, Kili. In the top right: Gandalfr, Þorinn, Þrar, Þrainn (written with thorns, a vestige of the rune we saw earlier) and at the end Eikinskjaldi. This is where Tolkien got many of the names for The Hobbit.

Seed 6: Sometimes names are transliterated, sometimes they are translated

Sometimes they are transliterated — basically written in the new alphabet trying to match the sounds fairly closely. Or alternatively they are translated — trying to keep some sort of meaning or connotation the same.

It’s important to note, Rohirric isn’t Old English. Théoden’s real name was actually Tûrac. “Théoden” is just an attempt at an Old English equivalent to give English readers a flavour of what Rohirric might have sounded like to Westron speakers.

Similarly, Tolkien retroactively explained his use of Old Norse names for the dwarves in the Hobbit as him translating their real names into Old Norse to reflect the language spoken by the Men of Dale. Note that Elvish names are almost never translated into primary creation equivalents. Elvish names are transliterated.

People are often surprised that, with the exception of the Elvish names, most of the names in the Lord of the Rings are translations. Some were transliterations, like Brandywine (from Baranduin) and Took. But the Hobbits actually called themselves “kudukin” and the Shire “Sûza”. Bilbo and Frodo’s surname was actually “Labingi” and they lived at “Laban-nec”. Tolkien just translated these into a sort of English equivalent—“Baggins” and “Bag End”—and encouraged others translating Lord of the Rings into other languages to undertake similar word play. Sam’s real name (or nickname anyway) was Banazîr, Hobbitish for “half-wit” and the Old English for “half-wit” is “samwís”. Rivendell is one of the few truly translated Elvish names. In Westron it was Karningul or in Elvish of course, Imladris.

In the following passage from Lord of the Rings, Gimli boasts about how he didn’t need a map as he was so familiar with the area.

He rattles off various features of the Misty Mountains giving their names in Khuzdul (the dwarvish language), Englished versions of the Westron name (like Dwarrowdelf, Silvertine, Redhorn and Dimrill Dale), and the Elvish name.

Seed 7: Many names are made up of components that each have some meaning

The final seed I want to plant is that these names above are incredibly rich and realistic.

In The Hobbit, most of the place names are descriptive: the Lonely Mountain, Lake-town, the Iron Hills, the Misty Mountains, Mirkwood. Most place names start off like this: some description people use in their own language to identify the place. But over time, the transparency of the name is lost for a variety of reasons. Names become shortened or misheard, languages change, names are translated or adopted by outsiders who don’t understand the original language, or an invader’s name for the place is forced upon the locals. The places themselves may even lose the very characteristic that led to their initial description.

All of this means that the names of places tell a story. They have a history behind them and sometimes uncovering that history is a puzzle that involves breaking up the pieces that make up each name.

For example, Gimli says that the Black Pit (a nice description in English!) is called “Moria” in the Elvish tongue. If you suspect “Moria” might mean something like “Black Pit” in Elvish, you’d be right. There are hints of this in other Elvish names for dark things: Mordor, Morgul, Morgoth.

By looking at a collection of names and identifying both the common element and common meaning, you can start to build a picture of the components that make up the name and reveal something of its history.

Here is just a small subset that is fun to explore.

What does the common element in Angband, Angmar, Angrenost, or Ered Engrin mean?

The common element is “ANG” (Engrin comes about through i-mutation) and all of these have something to do with IRON. Angrenost is the Sindarin named for Isengard which is itself just Tolkien translating the archaic Westron name into an Old English equivalent (“isen” being one form of the Old English for iron).

In Doriath, Gondor, and Mordor, the common element is “DOR” and they are all lands. Doriath means “land that is fenced”, Gondor “stone land”, and Mordor “black land”.

What about the common element in Angrenost, Belegost, or Fornost?

“OST” means a “fortress”. Angrenost is an “iron fortress”, Belegost is a “great fortress”, and Fornost is a “northern fortress” (think also of “Forochel” or “Forodwaith”).

What do Ered Mithrin, Mithril, Mithlond, and Mithrandir have in common?

Mithlond is the Sindarin name of the “Grey Havens”. The Ered Mithrin are the “Grey Mountains”. Mithrandir, or “Grey Wanderer” was Gandalf’s Sindarin name. The element “MITH” means “grey”.

These examples are just scratching the surface but it’s a wonderful puzzle for children and young adults to explore and it gets to the heart of Tolkien’s secondary creation and its incredible linguistic realism.

These seven seeds are just the very beginning, but hopefully I’ve given you an initial sense of just some of the things that can be explored in Tolkien’s books that can plant the seeds for a better understanding of how languages work and how they can be explored, not just in the secondary world but the primary.

Even if kids don’t become linguists or philologists, we can give them a much richer understanding of language through Tolkien.

This site is designed to give parents, caregivers and child care teachers ideas to teach young ones ages 2-6 years of age.

Book reviews and recommendations from an AP Lit teacher who is a certified bibliophile.

Essays on the works of J. R. R. Tolkien