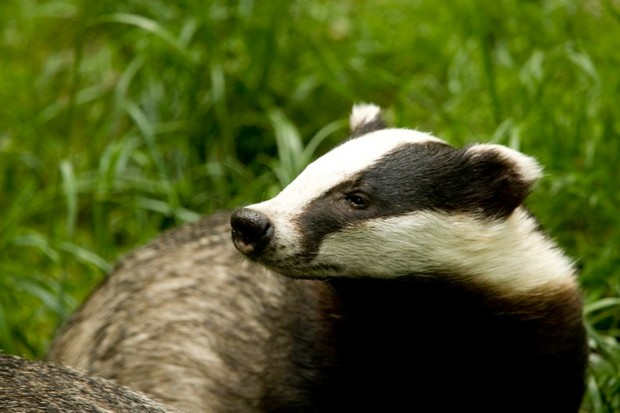 Last week I had the absolute pleasure of presenting at New England Moot on a topic that I have found near and dear to my heart- badgers! Badgers, in addition to being absolutely adorable, are also the unsung heroes of anthropomorphic literature. Throughout 20th and 21st century children’s literature, they have consistently been featured with similar qualities of loyalty and bravery. Firstly, I examine these qualities and other consistent themes throughout these texts, and then I provide examples of our favorite badgers from literature.

The Qualities of a Badger- Hufflepuff Style

J.K. Rowling put it best when she characterized the noblest of houses with qualities that have consistently shown in badger characters throughout the years. These qualities have shown in (almost) every badger character in children’s literature.

A Hufflepuff, according to the Sorting Hat, is “just and loyal…/

Those patient Hufflepuffs are true and unafraid of toil;” (Rowling PS 111).

“For Hufflepuff, hard workers were/ Most worthy of admission;” (Rowling GOF 163).

“Several outstanding brains have emerged from Hufflepuff house over the centuries; these fine minds simply happened to be allied to outstanding qualities of patience, a strong work ethic and constancy, all traditional hallmarks of Hufflepuff House” (Rowling Pottermore).

I was particularly intrigued by the use of the badger’s habitat throughout these stories. A badger’s home is a cozy one, with few decorations, but it is comfortable and cozy, very reminiscent of a hobbit hole. I found the following descriptions of the Hufflepuff Common Room and the Badger’s home in T.H. White’s The Sword in the Stone.

“A sloping, earthy passage inside the barrel travels upwards a little way until a cosy, round, low-ceilinged room is revealed, reminiscent of a badger’s sett. The room is decorated in the cheerful, bee-like colours of yellow and black, emphasised by the use of highly polished, honey-coloured wood for the tables and the round doors which lead to the boys’ and girls’ dormitories (furnished with comfortable wooden bedsteads, all covered in patchwork quilts)” (Rowling Pottermore).

“Badgers are not like foxes. They have a special midden where they put out their used bones and rubbish, proper earth closets, and bedrooms whose bedding they turn out frequently to keep it clean… [The Wart] admired the Great Hall most, for this was the central room of the whole fortification… and all the various suites and bolt holes radiated outwards from it… there were ancient paintings of departed badgers, famous in their day for scholarship or godliness… there were stately chairs with the badger arms stamped in gold upon their Spanish leather seats… the leather was coming off – and a portrait of the Founder over the fireplace” (White 328).

I particularly enjoy White’s description of the badger’s sett. It brings to mind an image of an Oxford don’s lounge, a place where Tolkien and Lewis might have held a staff meeting or an Inklings meeting.

For my linguist friends, some interesting linguistic connections!

Examples in Literature include Tommy Brock in Beatrix Potter’s The Tale of Mr. Tod, and Lord Brocktree in Brian Jacques’ Lord Brocktree. A hedgehog refers to the Wart (transformed into a badger by Merlyn) as “Mëaster Brock” (White 322-327).

Tommy Brock in Beatrix Potter’s The Tale of Mr. Tod

Tommy Brock is an unsavory character in Beatrix Potter’s story, and is known for kidnapping Benjamin Bunny’s children to be roasted and eaten in Mr. Tod’s oven.

“Tommy Brock was a short bristly fat waddling person with a grin; he grinned all over his face. He was not nice in his habits. He ate wasp nests and frogs and worms; and he waddled about by moonlight, digging things up. His clothes were very dirty; and as he slept in the day-time, he always went to bed in his boots. And the bed which he went to bed in was generally Mr. Tod’s” (Potter 9-10).

While Tommy Brock is a villainous lout, he is an exception to the rule. He was also one of the first anthropomorphic badgers to appear in children’s literature. Then, not two years later, Kenneth Grahame publishes The Wind in the Willows, which launches the consistent use of the loyal badger friend.

Mr. Badger in The Wind in the Willows.

The Badger is a quiet friend to his fellow animals. He takes them in when they need help, but he is firm and cross when Toad takes things too far. He is loyal to Toad’s family by repeatedly reminding him of his duties to Toad hall, and asking him to reflect on “what [his] father might think” of all his antics. The chapter in which he rescues Mole and Ratty from the cold winters night is very revealing of his character.

“The Badger did not mind that sort of thing at all, nor did he take any notice of elbows on the table, or everyone speaking  at once. As the animals told their story, he did not seem surprised or shocked at anything. He never said “I told you so,” or “Just what I always said,”or remarked that they oughtto have done so-and so, or ought not to have done something else” (Grahame 66).

The Badger in The Sword in the Stone

The badger in The Sword in the Stone is Arthur’s final teacher in his experiential educational journey. Merlyn describes him by saying “… I think he is the most learned creature that I know” (White 320).

“Well, I can only teach you two things, to dig, and to love your home. These are the true end of philosophy” (White 327 ).

He teaches Arthur his final lesson on how to be king by sharing a parable about how Man came to be the greatest of God’s creations, and how each animal had approached God for their various traits.

The badger writes and shares this story as a dissertation for his D.Litt., of which the badger is very proud.

Badgers in the Redwall Series

Brian Jacques is very consistent throughout his Redwall series. While the stories in the series change, the characteristics and qualities of each species remain similar. Badgers in the Redwall series are a brave, stalwart species hat led their kind fairly and honorably in their kingdom of Salamandastron. They were a warrior based society, meant to be either brave and fearless, but some would retire as wise sages.

During battle scenes, badgers would often display eucatastrophic bravery and engage in the Bloodwrath- a red eyed berserk frenzy (perhaps influenced by the Viking Berserkers). This Bloodwrath would cause their eyes to go red and effectively smash anyone in their path. Rostankowski provides an effective analysis of the badgers in the stories.

“The greatest warrior heroes of the series are mice, with badgers a close second. Badgers are always stalwart, brave, and great warriors, or leaders in other ways. They tend to have the fearlessness of the medieval French hero of the Song of Roland, and occasionally also his pride and foolhardiness. Badgers are most likely to fight to the death with their vassals, the hares. In certain circumstances badgers attain a greater level of wisdom, and conclude their lives as sages” (Rostankowski 87).

“While many species speak in dialects reminiscent of the various parts of the United Kingdom, only mice and badgers speak consistently without dialect” (88). I found this to be an interesting linguistic aspect, particularly after discovering the connections in the United Kingdom with Anglo-Saxon and Celtic.

Finally, we can’t forget about our dear friend Trufflehunter, one of my favorite characters from C.S. Lewis’ Chronicles of Narnia series. Trufflehunter is the voice of reason in a Narnia corrupted by fear, prejudice, and anger. He reminds everyone that compassion is necessary, and makes for a better Narnia. He alone recalls the basic tenets that Narnia was founded upon, and reminds everyone how the balance is meant to be maintained.

“I am a beast, I am, and a Badger what’s more. We don’t change. We hold on. I say great good will come of it. This is the true King of Narnia. And we beasts remember, even if Dwarfs forget, that Narnia was never right except when a Son of Adam was King. … It’s not Man’s country (who should know that better than me?) but it’s a country for a man to be king of. We badgers have long enough memories to know that” (Lewis 347).

The badger is a lesser known creature in the field of British anthropomorphic children’s literature, but it makes a consistent appearance throughout. From Kenneth Grahame’s The Wind in the Willows to Brian Jacques’ Redwall series, and even in J.K. Rowling’s Harry Potter series, the badger remains a learned creature, accustomed to its various comforts, but also a loyal friend and fierce fighter, if they need be.