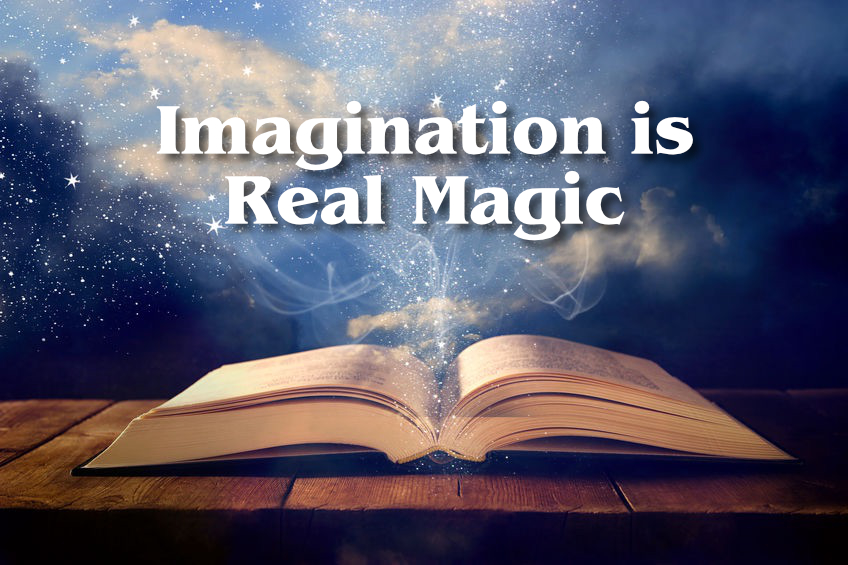 Today’s post is an informal reflection of a concept that I have been wrestling with for a few weeks. It is a concept that is implicit to many of you who read my blog, and to many of my colleagues and fellow researchers who work in the world of fantasy literature, and even education. Imagination is a wonderful, magical world in which many of us retreat to when the real world is either too boring or too difficult to process. Many times, imagination is a haven from harm, or it is simply a fun retreat. In November, I wrote a post about Dramatic Play in Preschools, and how important it is for young children to engage their imaginations for their overall development. However, the question I have been pondering recently is thus: what happens when we have limited to no imagination?

I have had the experience of working with a student or two in one on one sessions. Some of them are creative and fun to work with, and they answer my questions with different possible answers. However, some have difficulty with the imaginative approach. One, in particular, struggles with using their imagination in my class because they* have had little to no exposure to imaginative thinking. Their parents completely forbid screens in the home (which is another conversation entirely), and when they see them after class there is very little dramatic or imaginative play in their interactions.** As a result, my student often stays in their own comfortable boxes that they have created. They are interested in subjects that are “true,” and they tell me when “that’s not true” or “that’s not real.” To my understanding, they read very few imaginative fiction books at home, except for the occasional Dr. Seuss. Fairy tales and fantasy are a complete mystery to them. While these choices are not wrong, they did lead him to have some difficulty when it comes to certain imaginative thinking skills that present in the classroom. If I pose predictive questions about the text (“What do you think is going to happen next?”), his automatic answer is “I don’t know.” When he draws in his Story Maps, he feels more comfortable drawing things realistically, and will refuse to draw if I ask him to “use his imagination.”

What, then, are the consequences for this student? What happens when imagination or creative thinking is limited or undernourished? A study by M. Root-Bernstein and R. Root-Bernstein (2006) posits that imaginative world building in early childhood contributes to creative thinking in adults. While previous research declared early imaginative play to be “uncommon and associated with the arts,” the data in Root-Bernstein and Root-Bernstein’s study “validated [their] expectation that individuals inventing imaginary worlds in childhood participate as adults in a wide variety of disciplines,” including scientists, artists, and those who work in the social sciences and humanities.

Particularly in the social sciences and sciences, creative (older) individuals were significantly more likely to have engaged in childhood worldplay than students anticipating careers in these fields. In addition, over one half of the study’s select and general populations recognized an important role for worldplay in their adult vocations and avocations. Many perceived mature worldplay in their work; others in their recreation. Still others continued to engage in worlds first invented in childhood. Finally, the prevalent perception of connection between childhood play and adult endeavor argues that the invention of imaginary worlds is not some obscure form of make-believe, but rather a phenomenon of wider cognitive import. …

Finally, we argue that worldplay at any age and in many guises presents a microcosm with which to explore the complex nature of creativity itself. Mature worldplay at work, in particular, may add a nuanced perspective to the ongoing discussion of creative individuals as generalists or as specialists. Creativity is such that an individual must combine previously disparate elements of knowledge and action into something novel and effective.

This research ultimately shows that imaginative play and world building is not only consequential for the child, it is also consequential for the adult. Engaging the imagination gives children and adults the opportunity to consider all possibilities when faced with a problem or a question. Entrepreneurs, scientists, and artists all need imagination in order to thrive and grow in their respective vocations, just as a child needs imagination and play to be happy in their day to day experiences.

*Here, I use the gender neutral pronoun “they” in order to maintain anonymity and adhere to privacy rules and laws in the state. This is not the student’s personal gender identity, but it is necessary for me to keep the student anonymous.

**In due fairness, I spend 180 minutes per week with this child, and I receive information secondhand and through my limited interactions with the parents. It is entirely possible that I may be receiving misinformation or an incomplete story.

Celebrating and Sharing Bright Spots in Teaching and Learning

Kitchen Overlord - Your Home for Geeky Cookbooks and Recipes!

Kitchen Overlord - Your Home for Geeky Cookbooks and Recipes!

Formerly known as Books from Fangorn

Comparative Analysis of Mythology and Storytelling in the Ancient and Modern Worlds and more!

On Hiking, Nature, Storytelling and Tolkien.