Activating prior knowledge is a critical skill when teaching new material. Here’s how we used the story of The Lord of the Rings as a scaffold for introducing the Second Age material from the Alkallabeth and The Unfinished Tales of Middle Earth. (Image Credit: Ted Nasmith’s “The Return of Aldarion” 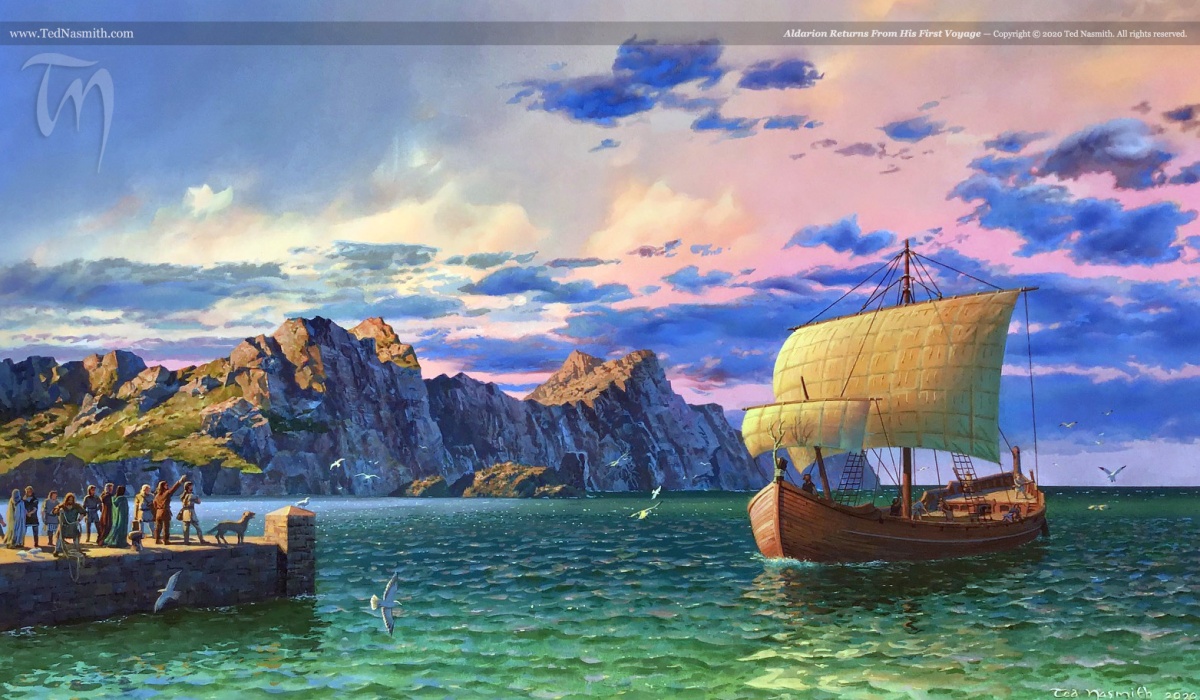 Last week, I discussed how James Tauber and I chose which content to teach, and which texts and references within Tolkien’s The Lord of the Rings would support the newer material. Today, we’re going to discuss the pedagogical methods we used during our classes and how are students were shown and discussed the new content.

The Second Age of Middle Earth can be tricky to teach on its own because it doesn’t have its own published work. References to the Second Age are embedded at the end of The Silmarillion and in the Appendices of The Lord of the Rings. References to the First Age and the Third Age often dominate the text. However, this made our challenge all the more interesting because it gave us the opportunity to seek out the relevant content in Lord of the Rings proper. On a side note, it also gave us the opportunity to seek out which stories and references Amazon could potentially use in The Rings of Power, especially since they don’t have the license for any content within The Silmarillion.

Our first class of Second Age begins with an overview of all of the Second Age references within the six Books of LotR. The primary content was drawn from Gandalf and Elrond’s recollections from “A Shadow of the Past” and “The Council of Elrond.” These passages gave our students the opportunity to glean the relevant seeds that would be discussed throughout the next several weeks and introduced the important thematic elements that would be prevalent throughout the stories of the Second Age. We were able to build a scaffold for students who were wholly new to the Second Age material by breaking down these passages from LotR.

Then all listened while Elrond in his clear voice spoke of Sauron and the Rings of Power, and their forging in the Second Age of the world long ago. A part of his tale was known to some there, but the full tale to none, and many eyes were turned to Elrond in fear and wonder as he told of the Elven-smiths of Eregion and their friendship with Moria, and their eagerness for knowledge, by which Sauron ensnared them. For in that time he was not yet evil to behold, and they received his aid and grew mighty in craft, whereas he learned all their secrets, and betrayed them, and forged secretly in the Mountain of Fire the One Ring to be their master. But Celebrimbor was aware of him, and hid the Three which he had made; and there was war, and the land was laid waste, and the gate of Moria was shut.

“The Council of Elrond,” Book II, The Fellowship of the Rings

Once we worked out which texts we wanted to use to discuss the Second Age, we put them in order from most familiar to least familiar and then roughly in chronological order. We didn’t split any readings other than Akallabêth because it was worth delaying the second half of that until the end of the class. We also split the course into two halves- the first few lessons would discuss the Second Age as it related to the Elves of Eregion and the forging of the Rings of Power, and the second half would focus on Numenor and the line of Kings.

And so we moved from the LOTR main text to LOTR Appendices to the Silmarillion extracts to the Unfinished Tales extracts, especially “A Description of the Island of Numenor” and “The Line of Elros: Kings of Numenor.” The Galadriel material (which is most fragmentary) is done last. As a final checklist, we discussed the references to the Second Age in Tolkien’s “Letter to Milton Waldman” (aka Letter 131 in Letters) In this letter, he outlines all (and I do mean all) of the important themes of Silmarillion, the Second Age, and LotR. While this letter determines what Tolkien thinks is important about the Second Age, it gives our students an opportunity to discuss if they agree with Tolkien’s perception, or if they’ve found other insights and themes in the text that the letter does not mention. Discussing this letter at the end of the course was also critical in making sure that the students could separate their own opinions and observations from the author.

Throughout our discussions, James and I are always sure to check in with our students and make sure that we are meeting them where they are in the Tolkien legendarium. Many of our students are only familiar with The Lord of the Rings, and others have extensive knowledge of the legendarium. All viewpoints, interpretations, and experiences are welcome in our classes, and it’s important to us that everyone gets to experience the magic of Tolkien’s history. While James often leads the lecture, my task is to moderate our chatbox, answer side questions, and draft our discussion questions. That way, the entryway for students with different experiences with Tolkien can engage with the material without feeling left behind or too far ahead.

One thought on “The Second Age: Part 2”

Comparative Analysis of Mythology and Storytelling in the Ancient and Modern Worlds and more!

On Hiking, Nature, Storytelling and Tolkien.